Protestors and the use of ‘dangerous attachment devices’ 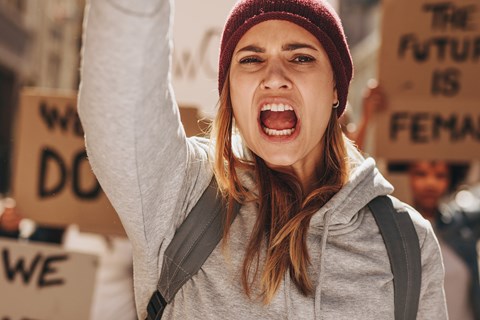 What is a ‘dangerous attachment device’?

Protestors often use tactics designed to attract attention to the issue being agitated, through the use of ‘dangerous attachment devices’. With the introduction of new legislation in Queensland, such tactics could constitute criminal offences.

Recently, some protestors have used techniques designed to cause disruption and interference, especially in metropolitan areas. One such technique by protesters is the use of items such as chains, padlocks or rope to secure themselves to a public fixture or an object (for example a road or a building).

Another example commonly seen is the suspension of protestors from infrastructure (such as buildings, transport or machinery) often using poles, tripods, ropes or platforms.

Recently, we have seen a spate of protesting activities nation-wide, particularly in response to the issue of climate change. The protests and the tactics employed by the activists protesting, have been both celebrated and condemned, attracting national and international attention.

The Queensland government has reacted to the protests by recently passing the Summary Offences and Other Legislation Amendment Act 2019 which seeks to minimise community disruption, risk of injury, and potential loss of life caused by the use of ‘dangerous attachment devices’ by protestors.

Protesting is often referred to in a legal sense as a ‘peaceful assembly’.

A person has the right to assemble peacefully with others in a public place; subject to considerations such as public safety, public order and the protection of the rights and freedoms of other persons. In Queensland, this right is enshrined through the Peaceful Assembly Act 1992 (PAA) and is also acknowledged within the Human Rights Act 2019 (HRA).

What are the concerns associated with protesting?

According to the new Act’s Explanatory Notes, dangerous attachment devices:

How does the Summary Offences and Other Legislation Amendment Act 2019 address these concerns?

According to the Explanatory Notes, the Act:

‘…introduces a range of measures to deter people from using dangerous attachment devices that endanger themselves, emergency services workers and members of the public and to assist police officers in minimising the disruption caused to the community through the employment of these devices.’

The key aspects of the Act are as follows:

The Act defines an attachment device to mean:

‘A device that reasonably appears to be constructed or modified to anchor a person at a place or to a thing so that the person can resist being safely removed or safely separated from the place or thing.’

It also defines the term as an attachment device that:

Introduction of criminal offences for the use of an attachment device

This offence carries a maximum penalty of 20 penalty units (currently a $2,669.00 fine) or 1 year imprisonment.

The Act amends the Police Powers and Responsibilities Act 2000 allowing police to:

In appropriate circumstances, rather than charging a protestor with one of the new offences under the Act, police will be authorised to instead issue infringement notices (requiring the payment of a fine and negating the need to appear in court).

How we can help?

If you or somebody you know has been charged with a criminal offence or issued with an infringement notice as a result of protesting activities, the team at Gilshenan & Luton are well-equipped to assist.